Single beep sound in your laptop or PC is a simple indication of system boot function. But if you are getting continuous noise or beep sound from your laptop then it’s a serious case of system error. To avoid that type of issue as soon as possible to get efficient performance through your PC. We know that computer is an electronic item & the priority of technical error is very high. Only regular maintenance & extra care from an expert can keep it working in a proper way. Very serious cases such as attacks of viruses or malware can make you take help from a computer service expert. Here in this article, we understand why is my computer beeping and keep making a sound.

So whenever you will receive some kind of computer beeping sound or noise from your laptop at the time of starting or operating your laptop then don’t take it lightly. This PC beeping noise is similar to the irritating sound of the computer speaker. Now here in this article, we will discuss why does my computer keeps beeping & how to resolve the PC’s beeping sound.

Why is My Computer Beeping

If there is a beep sound coming out of your computer or PC while turning it on then this is known as beeping. And the beeping sounds are called beep codes. It is used by the software that runs your computer hardware i.e. BOIS during the POST (an initial test taken to make sure that your computer is ok to start or not) to report some kind of initial errors inside the computer.

If you hear a beeping while turning on your computer then it could mean that the motherboard of your system has encountered some problem before it could send any signal of the error to the monitor. So, we can say that the beeping sound is a way to indicate some problem to you when the computer fails to show you any proper error on the screen.

How do you identify computer beep errors?

While hearing a single short beep is typical and signals that your system is booting up, hearing a sequence of beeps usually indicates an internal fault. Each succession of beeps represents a separate issue and indicates to a different section of your computer that is malfunctioning. So the AMI BIOS beep codes are shown below to guide you.

The following are the Award BIOS beep codes. The beep codes, however, may differ due to the broad diversity of computer manufacturers using this BIOS.

There are several reasons behind the computer’s beep noise. So when you think about why is my PC beeping continuously firstly, you need to find out the reason behind it. The next step after finding the beep code is how to resolve or tackle this issue. Here are a few effective steps to fix the laptop/PC noise.

If in case your computer is on and making a beeping noise, turn it off and try to restart again.

Very carefully listen to the beep codes that sound while the computer is booting. If you have any confusion in beep codes of that sound restart the system again for few more times if you want and get a clear thought of it. Restarting a couple of times is not going to affect or expand the problem.

Whatever beep sound you are getting from your PC write down it. Such as continuous beep noise from your laptop, numbers of beeps per minute, beeps that are short or long & beeps repeat or not. This may be sound silly but this one is the most important information & also help to determine what problem behind the computer beep noise.

Now, for the next step, you will have to find out what company has manufactured the BIOS chip or the motherboard of your computer. As we know the motherboard of a PC is an important part to run computer applications. The computer industry never defined any specific reason behind this unwanted noise. So this is also important to find out the manufacturer detail of your PC. With this detail, you will get a better understanding related to laptop noise.

The easiest way to figure this out is by installing the free system information tools. These tools will tell you about the BIOS‘s detail that either it is designed AMI, Award, Phoenix, or another company. If this doesn’t work then open your computer and take a peek at the motherboard, the company name will be mentioned there.

Now you know about the BIOS maker. Every BIOS maker has either own symbols for a different type of beep pattern. So, to figure out the real problem of your computer, use the Beep Code Troubleshooting Guide. Every Bios manufacturer company offers a tutorial guide for a better understanding. List of a few BIOS guides for the user.

Using the guide of  BIOS maker company to troubleshoot these beeping will help you in figuring out the real problem behind the beeps and solve them the problems could be like a RAM issue, a video card problem, or some other hardware problem, etc, which after getting acknowledged, will be solved.

If the above-mentioned process does not seem to be effective, there are some other alternative methods that you can try on.

RAM is an essential & important part of your computer. A faulty RAM can also prevent the computer from turning on, so you need to check it well. First of all, make sure the RAM is firmly inserted, sometimes a loosened RAM can also be the cause which will result in a ‘my computer does not turn on just beeps continuously’ problem. If in case the RAM is defective, replace it with a new one. After doing this also if it is not resolved then you need to move to the next option.

Sometimes it may happen that due to some disturbance or moving the PC from one place to another place, the wires may have gotten unfastened and are wobbling. So, you need to check the PC-to-HDD connections and tighten them and fix them properly.

For smooth working of your PC, you can also clean the dust on your PC, RAM resetting, CPU/HSF, GPU, and PCI cards, and then, at last, apply some thermal compound to balance them. If you have any difficult problem regarding your hard drive and the connections of the wires which you are not able to solve then take the help of a technician.

A faulty Hard Disk Drive (HDD) can also cause a computer continuous beeping or it may prevent the PC from being booted. So a better option is to replace the hard disk drive and get a new one. But before you change your drive, we will recommend you to taste the hard drive first. For this, you can take the help of a hard drive tester.

Also, one more thing you can do is to take out the HDD, connect it to another PC to access the files and folders and also check if it boots up from the hard drive or not. If the PC is unable to identify or access the hard disk drive, you need to replace it.

In this article, we have seen how to fix why is my computer beeping continuously & creating unwanted noise. We have seen different ways to tackle the issue by identifying the beep codes and a few other alternative methods to fix laptop beep noise. With the use of these various methods, you can easily identify the reason for unwanted computer noise & fix this computer beep sound.

The above article contains all the information to resolve or fix this issue. I hope the above sharing knowledge will help you a lot more. If in case the information is not suitable or you are not able to identify the problem or still getting continuous computer beep sound. We strongly recommended visiting the authorized service center to fix this issue.

Windows 10 Installation Issues, And How To Fix Them? 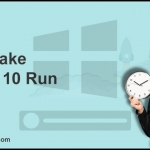 How to Make Windows 10 Run Faster?